These sweet little Greek honey cookies are super quick to bake, so much fun to make and highly addictive! These cookies are incredibly soft, moist, flavorsome and soaked in a delicious honey syrup.

Melomakarona (μελομακάρονα) are traditional Greek Christmas cookies, that are served during Christmas time throughout Greece. The word “melomakarona” is a combination of the two words “meli”, which means honey and “makarona” that comes from the ancient word “makaria” and means blessed. Now, I do realise that we are only April and nowhere near Christmas yet but really…. does it matter? Who needs an excuse to make some delicious bites of goodness?

Serve them over a hot cup of coffee and you will have a match made in heaven!

Make syrup
Combine ingredients in a saucepan over medium-high heat
Cook, stirring, for 5 minutes or until sugar has dissolved
Bring to the boil then reduce heat to medium-low
Simmer for 4 minutes or until syrup thickens slightly

Using a slotted spoon, dip cooled biscuits, 1 at a time, into hot syrup for about 30 seconds, turning over often until well coated
Return to trays
Combine walnuts and remaining ground cinnamon
Sprinkle over biscuits
Allow to cool before eating

In South Africa we have a sweet pastry known as a “koeksister” (literally translated as “cake sizzler”).  The name comes form the Dutch koek (cake) and sissen  (sizzle) – presumably a reference to the sizzling sound they make when being deep fried. You’d be hard-pressed to find a dessert more distinct to the nation’s Western Cape. There are two versions.The Afrikaner version is much more syrupy and crisp, while the Cape Malay version is an oval, fried dumpling with a texture more akin to a cake. Today, I am sharing the Afrikaaner version with you. 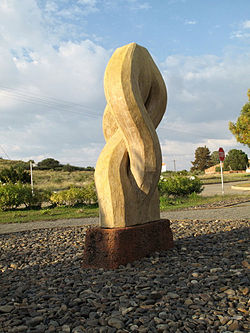 A monument of a koeksister in the Afrikaner enclave of Orania recalls a folk tradition of baking them to raise funds for building of churches and schools.

So what exactly is a koeksister you may ask? Well, the best analogy I can find is that they are similar to doughnuts but they are not really that either. With koeksisters, the dough is rolled out flat and then plaited in small lengths, deep-fried and then soaked in syrup and chilled overnight. All I can say is that they are highly addictive and absolutely delicious. It is hard to stop at just one.

for frying, sunflower oil
For the pastry:

Place the water and sugar  in a saucepan and bring to the boil
Once the syrup starts to boil, add the lemon juice, rind and ginger and continue to simmer for 10 minutes
Cool the syrup to room temperature
Place the syrup in the fridge in (2 containers) to cool as you need your syrup to be chilled!

Heat the oil to 160 °C
Using an oiled rolling pin, roll out the dough on an oiled surface to a thickness of 5 mm. Cut the dough into rectangles of 6 x 15 cm
Cut each rectangle lengthways into 3 strips, leaving one side uncut. Plait the 3 strips and press the cut ends together firmly
Fry in batches in the hot oil for 6–7 minutes, or until dark golden brown
Drain them for a few seconds on paper towels
Remove with a slotted spoon and dip the whole cooked koeksister immediately into your chilled syrup – leave 1 container in the fridge
Remember – the koeksister has to be hot and the syrup cold in order for the syrup to be absorbed by the dough!
Remove from the syrup with a slotted spoon and place on a wire rack
The syrup will gradually become hot with use, so when you have done about half of the koeksisters take the remaining syrup from the fridge and use this for the balance
Enjoy!

Note: The colder the syrup the better! Make it the day before and place in the fridge to ensure it is ice cold.