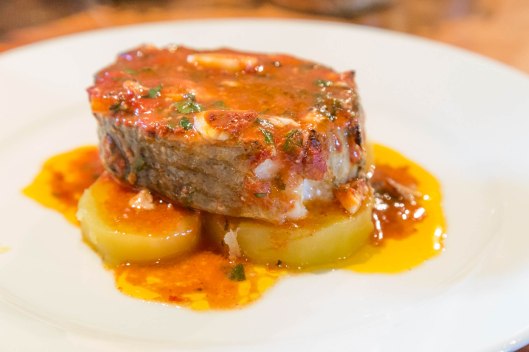 Another easy, quick and healthy recipe that is simply bursting with flavour. Use a white-fleshed fish that will stand up to the robust flavors in the tomato sauce. I recommend cod or halibut, black cod or striped bass. This dish can be done with fish fillets instead of steaks if you prefer.

Cook the potatoes whole in boiling water for about 25 minutes
Preheat the oven to 200C / 400F
Pour about 1/2 tablespoon of olive oil into the bottom of an ovenproof dish that can fit the fish side by side
Add the fish steaks
Season with salt and pepper
Place the sliced garlic and the parsley on the fish
Drizzle with olive oil
In a small bowl mix the tomato paste with the white wine and pour over fish
Bake for 15 minutes, basting once or twice with the wine and tomato mixture
Once the potatoes are cooked, cut into even slices and divide between the warmed serving plates
Place on top of the potato slices, a piece of fish
Divide the leftover liquid between the two plates and serve immediately
Enjoy!

In Italy this dish is called Spaghetti con vongole. It is a beautiful dish with a delicate flavour that looks very elegant but yet is incredibly quick and simple to prepare. I always keep some frozen clam shells in the freezer in case of unexpected guests or as in this case, the pizzeria was closed. Stuart and I have started playing boules on Tuesday afternoons. Boules is a game associated with old French men, a hot sunny day and red wine or Ricard, an aniseed flavoured drink. Well, we had the hot sunny day but there were no old French men, we were a mixed group of about 16 men and women of all nationalities, Dutch, French, English, Belgium that all belong to a local international group in Le Bugue, and we had no wine or Ricard. Although we did go out for a glass of rosé afterwards to rehydrate. The group has lots of activities throughout the month including walks, concerts, movies, social get togethers, lunches, bridge and Pétanque.
What is La Petanque, you ask?
Pétanque is a form of boules where the goal is to throw  metal balls as close as possible to a small wooden ball called a cochonnet (literally “piglet”) or jack, while standing inside a circle with both feet on the ground, on a dirt surface beneath plane trees.
But, I digress. We had planned to eat at our local pizzeria but forgot that it was closed on Tuesday evenings, so we simply headed home. It was well after 8 and we were rather hungry, so dinner needed to be quick and easy. Pasta generally meets those requirements but what sauce to make? Upon opening the freezer, I spotted the small clams =- spaghetti con vongole was going to be it! 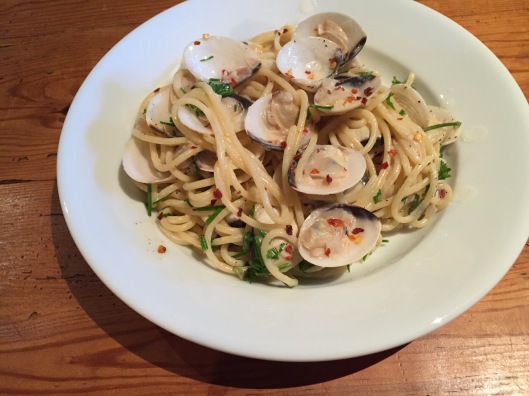 Cook the spaghetti in salted boiling water until al dente, about 8 minutes
Meanwhile, in a large skillet, heat the oil over medium high heat
Add the shallots, garlic and chilli and cook until the shallots are soft and translucent
Add the white wine, salt and pepper and clams
Cover the pan and simmer until all the clams have opened, about 4 to 5 minutes
Discard any that remain closed
Add the cream if using
Drain the pasta and toss it with the clam mixture to coat
Stir in the parsley
Serve immediately with crusty bread to mop up the juices
Enjoy!

Serve with warm baguette and a nice chilled glass of white or rosé. You can do the recipe with just mussels or use a combination of mussels and small clams. Remember that clams take a little longer to cook than mussels so add the clams first if using. 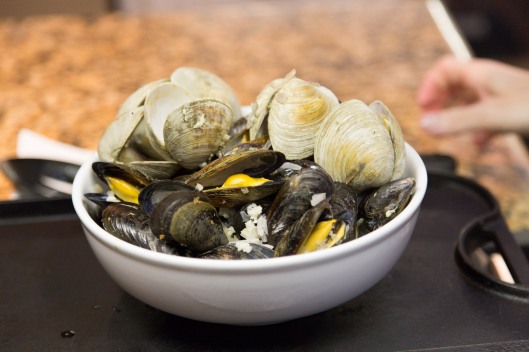 Serves 4 as an appetizer or 2 as a main course